Of Nature and Architecture 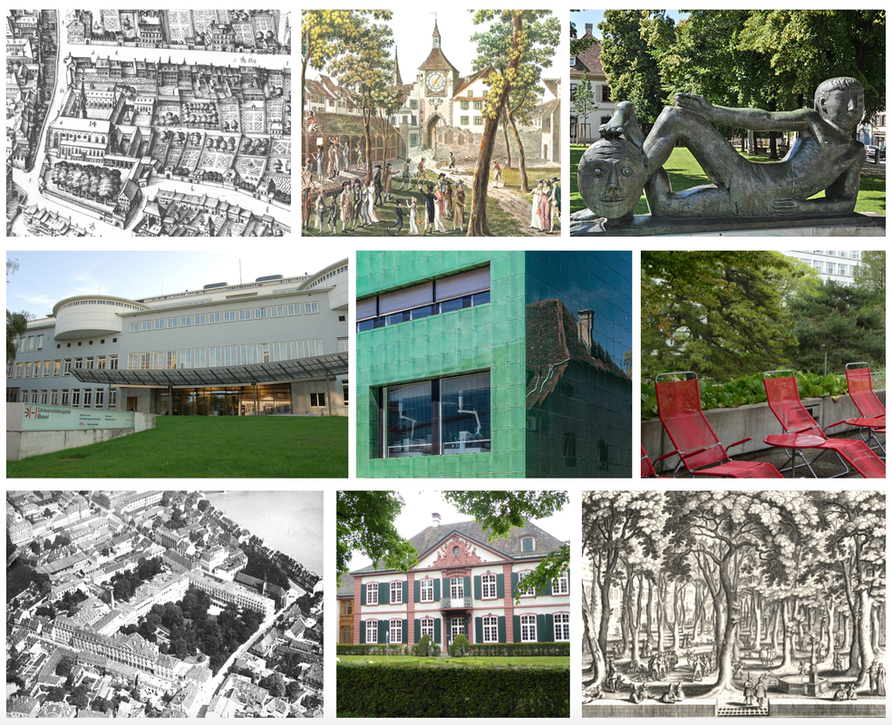 The second walk in the series on “Nature and Architecture” takes us through an area just outside of what used to be Basel’s inner ring of defence walls. In the early 13th century, the open countryside extending to the north of the fortified densely built city, provided space not only for large pleasure garden (across the Peterskirche) and for a Dominican monastery (in front of the city’s Kreuztor gate), but also for the development of a new residential neighbourhood, the “Neue Vorstadt.” Some of Basel’s most prominent Baroque houses, surrounded by generous ornamented gardens, were built here in the late 17th and 18th century. During our walk we look at some historical depictions of these buildings, try to decipher the role nature had played in earlier times, and discuss some of the changes that have taken place since.

We meet at the Totentanz, a small park across from the Predigerkirche, where we address the symbolic meaning of a tree grove and its place in monastic graveyards, as well as the historical importance of the “Dance of Death” murals. Walking along Spitalstrasse, we look at the recreated Baroque garden of the Faesch’es Haus, and discuss some nature related interpretations of Herzog&deMeuron’s Rossetti building. We then visit the garden of the University Hospital and address the healing role of nature. Continuing on to Hebelstrasse, we look at the Markgräflerhof and the Holsteinerhof, the legacy of an aristocratic couple, the Margrave of Baden-Durlach and his wife. Both buildings and their gardens are being used today by the University Hospital.
The walk ends on Petersplatz, a tree-covered public space reminiscent of large hall churches. We discuss its history and the way in which its location between what used to be Basel’s inner and outer rings of defence walls had influenced its character in the times past.
Basel's Botanical Garden is right next door - why not explore it on your own?
Here you can see en nature all the plants sculpted in stone on the main portal of the Münster!

PLANTS
​depicted on the main portal of the Münster in Basel