​BASEL AND ITS INNER GROWTH: NEIGHBOURHOODS IN TRANSITION 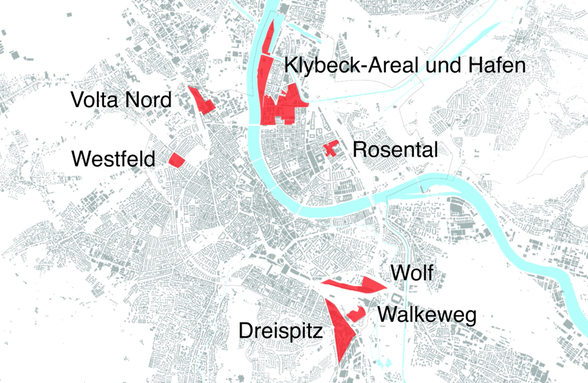 On the verge of a growth spurt: 113 hectares of opportunity
Basel plans on growing substantially until 2035. The number of inhabitants is to increase by 20,000, the number of jobs by 30,000. The eight areas Westfeld, Rosental Mitte, Volta Nord, Walkeweg, Dreispitz Nord, Wolf, Klybeckplus as well as Klybeck- and Westquai offer room for such development. A total of 113 hectares, or around 160 football pitches, are available.

Our Spring and Summer 2020 series of guided walks will explore areas undergoing the process of transition: from the underused industrial sites of the past to the newly planned, lively neighbourhoods of the future.

Separating the Birs and Birsig valleys, the Bruderholz uplands belong geographically to the southeastern part of the Sundgau hills. About two kilometres wide and five kilometres long, this gently undulating area rises to more than 100 meters above the valleys. Politically, the area is shared by several Basel-Land communities and by the city of Basel, which started to develop the northernmost part of Bruderholz as a residential neighbourhood at the very beginning of the 20th century.

Embedded in nature and characterised by curving streets, the new neighbourhood based on the ideas of the garden-city movement contrasted sharply with the late 19th century Gundeldingen. We will notice this difference already at the beginning of the tour as we will ascend winding streets lined by residential buildings typical of the so-called Reform Architektur. We will continue along the Bruderholz-Allee, discussing the importance of the tram line and other infrastructure for the area’s development. Later on, we will see some good examples of modernist architecture, including the late-1930s primary school based on the pavilion typology, and sacral architecture of the late 1950s and the early 1960s, exemplified by the Bruder Klaus- and Tituskirche. Another aspect of city planning that has left its mark on Bruderholz is the water-supply infrastructure: our itinerary will include the landmark 1926 Wasserturm, the water reservoirs and filters with historicist facades dating back to the first decade of the 20th century, and the new reservoir (2008) fronted with a concrete grid reminiscent of a trellis overgrown with plants. The last part of our walk will take us through Jakobsberg - one of Basel’s most significant housing estates built in the WWII aftermath. Originally planned for families with low and middle income, this settlement of modest, well-designed houses constructed in three phases (1943-46, 1948-54, 1965-70) follows the land contours and is almost village-like. We will end the tour in Wolfschlucht, just below the Rudolf Steiner School.

To find out more about the tour dates, please contact dina@architecture-walks-and-talks.net
​
​HEUWAAGE TO PAULUS-QUARTIER
More info